Thanks to the help of our friends and supporters, The Art House is now open in line with COVID-19 restrictions.

Development of the Art House

St Matthews House has been a hidden gem that at the heart of Sheffield for over 150 years. It was built to serve the densely populated slums and “mesters” workshops which made up the area, providing a school and social welfare for local people living in abject poverty.  As the city centre area changed, with clearances of much of the local housing, St. Matthews House took on a different role, more recently offering office space for a range of charities, as well as cheap and friendly meeting rooms for a host of community groups and associations.

Time inevitably took its toll on the building, and though full of character and charm the overall condition of the building deteriorated to the extent that a major refurbishment was required. So a small group of people from the congregation started to imagine how it could be restored to its former glory, and once again play a part in serving the needs of the local community.

Consultation with local stakeholders immediately identified the building’s potential in providing a new and non-stigmatising venue for working with marginalised groups. From that point the plans for a new charity quickly took shape;

Thank you for all our volunteers, supporters and funders for your hard work and continued support of the Art House.

History of the building

The House was built by the famous Fr Ommanney, who was priest at St Matthews from 1882 to 1936. Fr Ommanney was driven to bring the good news of the Christian faith to the poor of his parish. And they needed his help – the living conditions were appalling, so bad that St Matthews was built because the cathedral could not keep up with the number of funerals.

Fr Ommanney decided that just burying people faster was not good enough; living conditions for the poor had to be improved. And so he built St Matthews House to provide the first social care in the area – offering food and education and a focus of hope and community. He also lobbied the City Corporation to provide sewage and fresh water.

Fr Ommanney was not just concerned with people’s physical well-being, he was also concerned for their spiritual nourishment. And so he made St Matthews church beautiful with detailed copper work from the Arts and Crafts movements on font and lectern, hand carved choir stalls and icons to give people a glimpse of another life.

The mission of St Matthews House has changed with the times, however the Art House carries on the tradition of Fr Ommanney – offering people the opportunity to discover more of their humanity through the process of creating art and ceramic work. 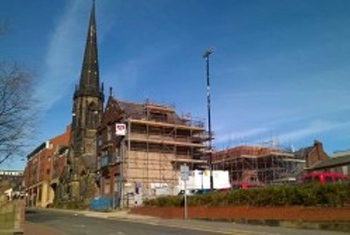